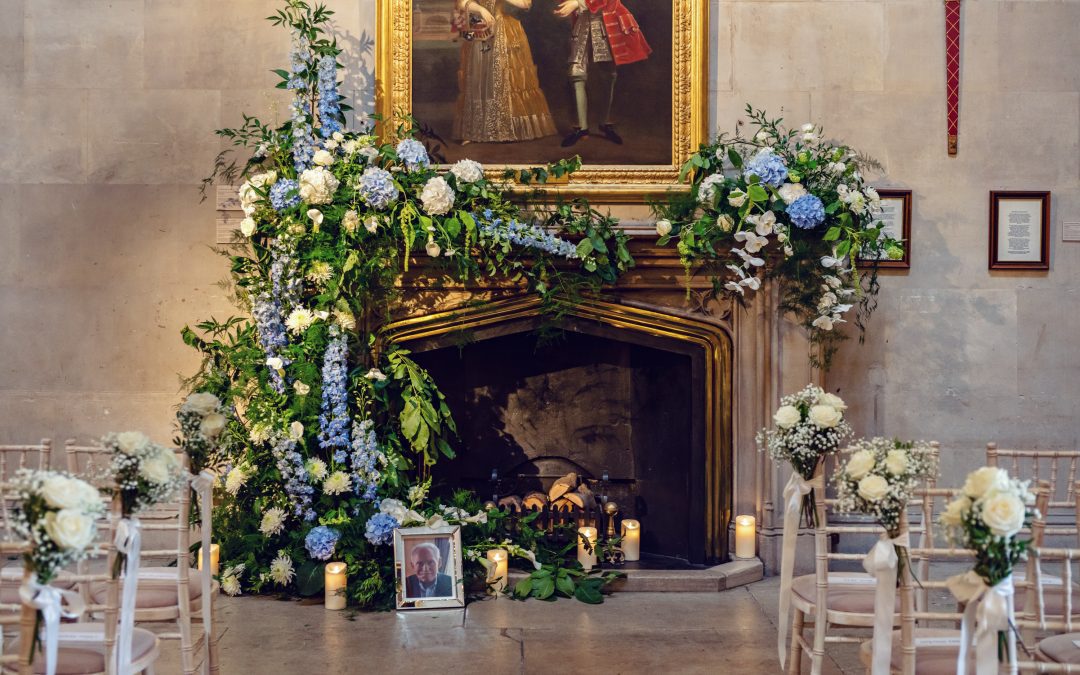 Tayler and Michael’s wedding really stood out for me last year. Mainly because it was the first couple I’d worked with at Ashridge House, who had decided to hold their ceremony facing the fireplace in the main hall, rather than on the stairs.

It was a brave move, as they were the first couple to decide to do so but they were confident it would work. Because of this, we just had to make a feature of the fireplace. Tayler and Michael (and Tayler’s mum, who was so excited about the wedding and thrilled to be involved in the planning) gave me free rein on the design front. They wanted a statement piece and I already had it planned out in my mind.

They also wanted the stairs to be a feature, as it’s a great place for group shots after the wedding.

The colours were also beautiful – pastel blue and white. Blue flowers always look fresh and white brings the brightness you need with blue flowers as they are often lost through a lens.

For the tables, Tayler was keen to keep things simple. We used our beautiful Cherry Blossom Trees for the centrepieces, with hanging glass globes with LED tea lights for a delicate glow as the evening drew.

We were thrilled with how the flowers looked on the day and even happier to see Tayler & Michael’s reaction to them.

We use cookies on our website to give you the most relevant experience by remembering your preferences and repeat visits. By clicking “Accept All”, you consent to the use of ALL the cookies. However, you may visit "Cookie Settings" to provide a controlled consent.
Cookie SettingsRead MoreReject AllAccept All
Manage consent

This website uses cookies to improve your experience while you navigate through the website. Out of these, the cookies that are categorized as necessary are stored on your browser as they are essential for the working of basic functionalities of the website. We also use third-party cookies that help us analyze and understand how you use this website. These cookies will be stored in your browser only with your consent. You also have the option to opt-out of these cookies. But opting out of some of these cookies may affect your browsing experience.
Necessary Always Enabled
Necessary cookies are absolutely essential for the website to function properly. These cookies ensure basic functionalities and security features of the website, anonymously.
Functional
Functional cookies help to perform certain functionalities like sharing the content of the website on social media platforms, collect feedbacks, and other third-party features.
Performance
Performance cookies are used to understand and analyze the key performance indexes of the website which helps in delivering a better user experience for the visitors.
Analytics
Analytical cookies are used to understand how visitors interact with the website. These cookies help provide information on metrics the number of visitors, bounce rate, traffic source, etc.
Advertisement
Advertisement cookies are used to provide visitors with relevant ads and marketing campaigns. These cookies track visitors across websites and collect information to provide customized ads.
Others
Other uncategorized cookies are those that are being analyzed and have not been classified into a category as yet.
SAVE & ACCEPT
Powered by